President Trump’s Tax Plan and How It Impacts Americans

About the Author: Jeanette Smith 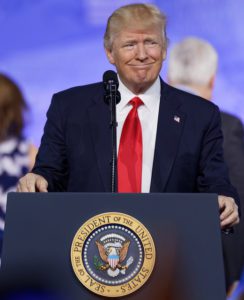 On Dec. 22, 2017, President Trump signed the Republican tax bill. The signing, took place in the Oval Office, before the president’s trip to Mar-A-Largo, his private club in Florida. Although many claim this is the first major legislative victory for Trump, others say it has been a great year.

In fact, Senate Majority Leader Mitch McConnell said, “This has been a year of extraordinary accomplishment for the Trump Administration,” according to WGN9.

Before signing the tax bill, the president used Twitter to boast about his accomplishments during his first year in office.

“With all my Administration has done on Legislative Approvals (broke Harry Truman’s Record), Regulation Cutting, Judicial Appointments, Building Military, VA, TAX CUTS & REFORM, Record Economy/Stock Market and so much more, I am sure great credit will be given by mainstream news.”

The president fulfilled his promise to sign a new tax bill into law before Christmas, however, critics claim the new tax plan does more to hurt millions of Americans than it does to help. It is the largest tax overhaul in 30 years. However, the fact that the pendulum swings both ways, in terms of a tax cut for some, and a an increase for others, is not readily mentioned.

During the earliest efforts by Republicans to draft the tax plan, Democrats proactively sought to stop the bill from reaching the floor for a vote. Oregon Senator Ron Wyden said the bill would not deliver on the president’s promise to benefit the middle class, but rather benefit high earners and corporations. “This is a middle-class con job,” said Wyden, as reported by The New York Times. Other critics claim the tax bill adds a burden to Americans living in high tax states such as New York, New Jersey, and California where taxes can be over 10%. Under the new plan state and local taxes are no longer deductible, which significantly hurts the middle class living in those states.

Despite Democratic efforts, the fractured GOP were able to come together and pass the landmark tax bill.

How will the new tax plan impact Americans?

Although there is no such thing as a perfect tax policy, most Americans can expect to see their tax bill decrease, while others will pay higher taxes. Under the new plan the standard deduction is doubled, it is now $12,000 for individuals and $24,000 for married couples. Therefore, most middle-class households that take the standard deduction, get a tax cut. However, for the one-quarter of middle-class families that itemize, it is a different story. About 40 percent of households that itemize will pay more in 2018, it could be a lot more in some cases, indicated in a report by The Upshot.

Families with children, will get a bigger tax cut. The child tax credit is now $1600 instead of $1000. However, the benefits start to phase out above a certain income, which results in lower cuts for families with higher incomes.

The National Review revealed that President Trump’s tax plan will cut taxes by $850 for the average middle class family per year through 2025. Critics overlook the fact that during the early years, it equates to about $7000, followed by about $100 annual tax increase later. Still a favorable deal in the eyes of most Americans.